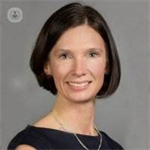 Ailsa Hart is Consultant Gastroenterologist at St Mark’s Hospital and Sub-Dean of St Mark’s Hospital Academic Institute, London, UK. In 2016, she achieved academic promotion at Imperial College London, UK, and is now Professor of Practice. She is also an Honorary Skou Proessor at the University of Aarhus in Denmark.

Professor Hart studied medicine at Oxford University and was awarded a First Class Honours Degree in 1992, and additional prizes for outstanding achievements. She achieved Membership of the Royal College of Physicians in 1998 and subsequently Fellowship of the Royal College of Physicians. She trained in gastroenterology and general internal medicine in London and also received training at the Academic Medical Center in Amsterdam, the Netherlands. Professor Hart achieved her PhD with Imperial College London in 2005, funded by a Wellcome Trust Fellowship. She was appointed to the consultant staff of St Mark’s Hospital in 2008 and became a Clinical Senior Lecturer at Imperial College London, having been awarded a highly competitive Clinical Senior Lectureship by the Higher Education Funding Council for England. She subsequently achieved the title Professor of Practice at Imperial College London in 2016.

Professor Hart has published 2 books and over 200 papers, reviews, and book chapters; has supervised/co-supervised more than 20 higher-degree students; and lectures widely nationally and internationally. She was Chair of the Gut Microbiota for Health Group of the British Society of Gastroenterology. She is currently on the Governing Board of the European Crohn’s and Colitis Organisation (ECCO) as Treasurer; has been a member of the Clinical Committee of ECCO; is involved in writing the ECCO ulcerative colitis guidelines; is on the inflammatory bowel disease (IBD) Clinical Research Group Committee for the British Society of Gastroenterology; is the UK Patient and Public Involvement Lead for Gastroenterology; is on the Research Committee for the Crohn’s and Colitis UK charity; collaborates widely across the UK particularly within the UK IBD Genetics Consortium; and is a member of the International Organization for the Study of Inflammatory Bowel Disease (IOIBD). She was previously Associate Editor of the popular gastroenterology journal Alimentary Pharmacology and Therapeutics.