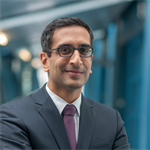 Raja Atreya is Senior Physician and Head of the Inflammatory Bowel Disease (IBD) Unit, Outpatient Clinic, and Clinical Study Centre at the University Hospital Erlangen in Germany; he is also Heisenberg Professor of Translational Immunology in IBD at Erlangen University. Professor Atreya received both his initial degree and his MD, for which he graduated summa cum laude, from the medical school of the Johannes Gutenberg University of Mainz in Germany. He then went on to work as a physician at the university medical centre, and subsequently participated in the postgraduate programme on antigen-specific immunotherapy. In 2010, he was appointed as Professor for IBD at the University Hospital Erlangen, and was appointed to his current post in 2016.

Professor Atreya’s research work focuses on the identification of response predictors (e.g. molecular endoscopy) and resistance mechanisms to biological therapies in IBD. He has received many awards in the course of his career including: the Theodor Frerichs Award from the German Society for Internal Medicine; the Paul Ehrlich and Ludwig Darmstaedter Prize for Young Researchers from the Paul Ehrlich Foundation; and the Rising Star Award from the United European Gastroenterology Federation (UEG). He has also published widely, with articles in peer-reviewed journals including Nature Medicine, The Lancet Gastroenterology and Hepatology, Gastroenterology, Gut and Journal of Crohn’s and Colitis.