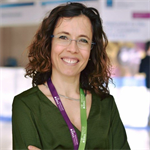 Dr Tavares Sousa has authored numerous articles in peer-reviewed journals, such as Inflammatory Bowel Diseases, Journal of Crohn's and Colitis, Clinical Gastroenterology and Hepatology, United European Gastroenterology Journal, and Gut, and is a reviewer for six journals, including Inflammatory Bowel Diseases, United European Gastroenterology Journal, and BMJ Case Reports). She has been an active member of the Portuguese IBD Study Group (GEDII) since 2006, conducting most of her research via an Investigation Scholarship from this organization in 2016. From 2018 to 2020 she was coordinator of the Young Portuguese IBD Study Group (YGEDII) and is now the national representative for Portugal at the European Crohn’s and Colitis Organisation (ECCO). She has been a fellow of the European Board of Gastroenterology and Hepatology since 2010.